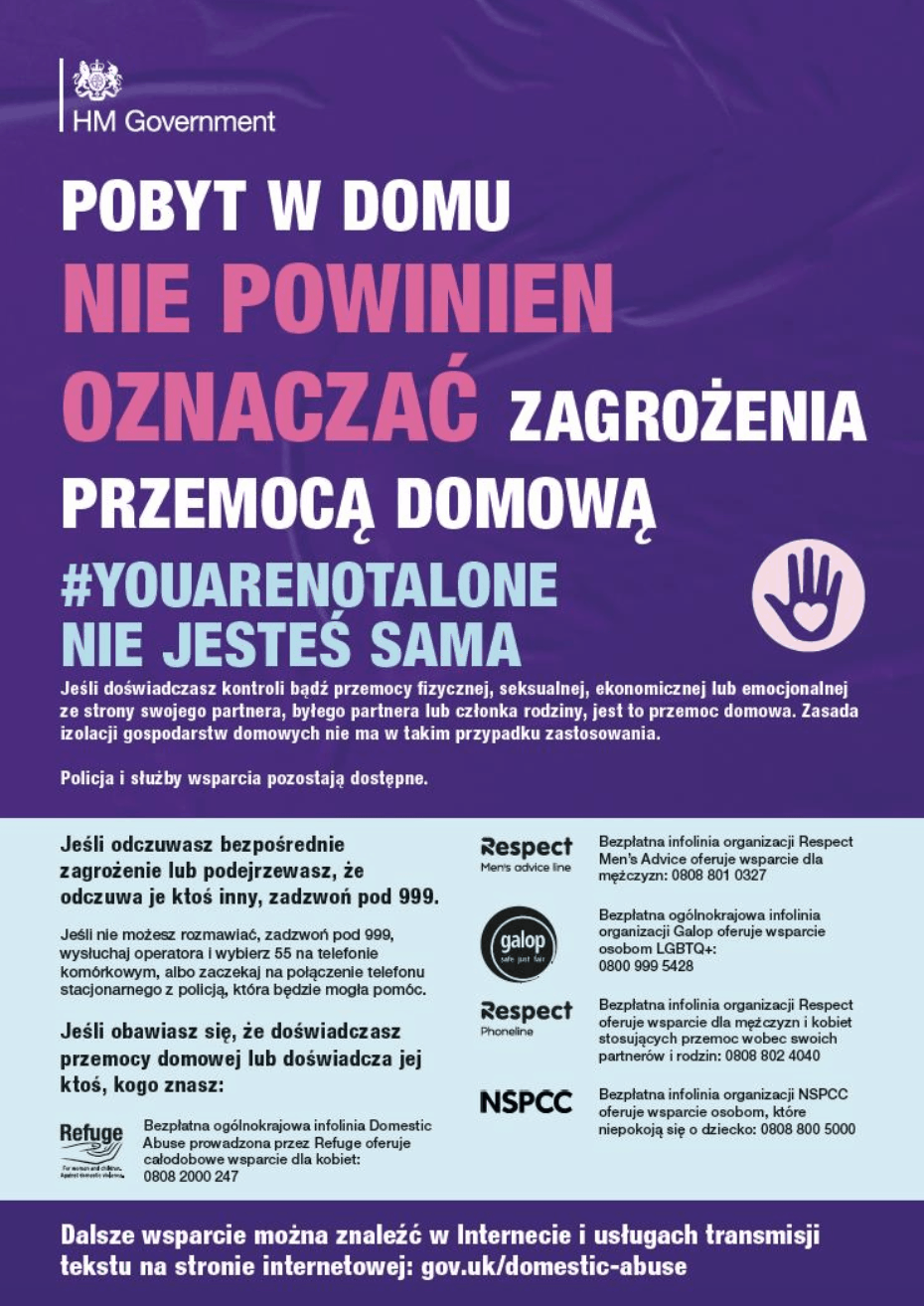 Every week, two women living in England and Wales are killed at the hands of a current or former partner, and almost every third woman will experience domestic violence in her lifetime, according to research by Refuge. These stats are incredibly concerning and have only been amplified since the Coronavirus pandemic, requiring everyone to stay at home in order to, ironically, stay safe.

In 2020, all organisations providing assistance to victims of domestic violence recorded an over 65% increase in the number of calls to free support lines, proving just how much worse the Covid-19 pandemic has made this already awful situation. Violence takes many forms; it is not always physical. Perpetrators often abuse their victims mentally or emotionally – they control, threaten and force them to act or behave how they want them to.

The Opoka Foundation, based in Bristol, is the first Polish organisation in Great Britain to help Polish women and their children who experience domestic violence. In May 2012, co-founder and director, Aneta Mackell, organised the first support group, now known as ‘Opoka’, and says that’s when her passion was born. Since February 2018, the free, 24-hour Opoka Helpline in Polish (0300 365 1700) has been operating continuously. They offer psychological support, therapy, assistance with court procedures and, if necessary, immediate intervention to keep the woman and her children safe.

Mackell reveals that “since the end of March (2020), the number of calls has increased significantly – from 150 to 1,200 calls per month”. Next year in May 2022, Opoka will celebrate its tenth birthday – marking an incredible 10 years of helping Polish women to escape domestic violence. Aneta herself had personally experienced long-lasting and life-threatening domestic violence during her first marriage in Poland. Over 18 years ago, after many years of suffering, she finally found the courage and inner strength to break free from the relationship. She thankfully managed to start a new life with her four children, away from the abuse of her husband.

Domestic Violence Signs To Look Out For

In terms of women, victims of domestic violence are very often silent and thoughtful. After work, they quickly return home so as to not be accused of having gone somewhere or seen anyone – so as not to be accused of treason. Victims of domestic violence live in constant fear and tension; they act as if they are always prepared for the dangers ahead.

GottaBe! Ethnic have created the following campaign video in Polish, with the aim of highlighting the warning signs to Polish women and making them aware that there is help out there, as well as where to find it.

Taking Your Life Back

“The worst thing is to leave everything and leave the house…” says Sylwia, who a few years ago decided to call the Opoka hotline. “I remember once calling there just to talk. I wanted nothing but a simple conversation with another human being…but the support I received from the people of Opoka made me open my eyes to a serious aspect of my relationship with my partner. Opoka opens the eyes of women to women, who do not want to see some disturbing and alarming issues in their relationships. I eventually ran away from the home where I spent over five years.” Sylwia is by a long way not the only person whom Opoka helped to start a new life away from domestic violence and regain long-lost dignity.

“Domestic violence is not only mental and physical abuse of a family member,” adds Izabela. A few years ago, she also used the help of Opoka. It is thanks to this organisation and its founder, Aneta Mackell, that Izabela and her children found shelter in the safe house. “Shame, helplessness and enormous fear made it impossible for me to leave the torturer. When I started looking for help, I found Opoka on the Internet, wrote an e-mail and so we started cooperation”, says Izabela. “It is impossible to describe in words the sense of freedom and security we felt with the children in the shelter.” Izabela has experienced psychological, sexual and economic abuse in her marriage. In England, she lived with her partner and three children. She did not know the English language and was dependent on her torturer. Unfortunately, her story is not the only one – women who are intimidated, lost and cut off from contact with their relatives in another country, are often stuck in toxic relationships for years.

Aneta, together with a group of qualified specialists and volunteers, supports Polish women both in Bristol and throughout the UK via the Opoka hotline. This is called not only by women who experience domestic violence, but also by their employers, neighbours and friends who do not know how to help them.

After receiving the phone call and assessing the situation of the victim of domestic violence, concrete steps are taken. If the situation is critically dangerous and a woman calls for help, she often turns to the hotline with a request to call the services because, due to the language barrier, she is not able to herself.

“Women often do not see themselves that what a man is doing to them is a form of violence. The fact that he does not beat them, but controls them financially, coerces them, intimidates them or persuades them, is also a form of violence,” says Mackell. “Don’t wait – call for help, because even a simple conversation with another person can change a lot”.

If it is not a situation that requires immediate intervention, qualified consultants arrange a longer interview with the victim of domestic violence – it must be conducted in a safe environment. If there are no such possibilities, the woman signals it with specific words and signals. It is enough for her to say “this is a mistake” during a telephone conversation with the Opoka consultant – this is a sufficient signal that the perpetrator is nearby and the conversation is currently not possible.

The next step is to establish an individual plan and take specific steps. When a woman decides to work with Opoka, she is provided with psychological help and therapy. If there is such a need, he or she receives assistance in finding a flat or in conducting a court procedure.

“Polish women, unfortunately, do not recognise sexual violence in marriage or in partnership. When asked about it, they often deny it. However, during such an interview, we always ask a series of questions and it turns out that the partner is committing violence” adds Mackell.

Opoka is not only a helpline. In a crisis, the foundation helps women and their children move to a “safe house” – a place where victims of domestic violence can feel safe and where others will also speak Polish. Statistics show that language barriers are a serious problem, thus safe houses are encouraging victims to talk. Research by Women’s Aid confirms that only 11% of women who did not speak English were able to find a safe haven in the UK.

The safe haven concept can exist and operate mainly thanks to subsidies and support from companies and private persons. Such safe houses are more than just warm beds – they are places that will be able to provide psychological and emotional support for women. Employees of this type of institutions help in creating a plan for further actions, gaining access to financial benefits, and most importantly, in rebuilding self-esteem.

“As a psychologist and psychotherapist, I joined the Opoka Bristol team at the end of 2016,” says Joanna Klekotko, psychologist and psychotherapist. “Initially, I was a volunteer for two years, becoming a formal Opoka therapist after that. I was constantly improving my skills and individual contact with Opoka’s clients – women who experienced violence – allowing me to understand the scale of this phenomenon.”

“In Opoka we will not save the whole world, but every effort matters and every action can really change someone’s life” emphasises Ewa Kalicka, who works on the hotline as a volunteer. “I wanted to help vulnerable people experiencing domestic violence who cannot find support elsewhere. Opoka welcomed me warmly, trusted me and gave me constructive feedback, which allowed me to develop my communication skills even more. This positive attitude on the part of Opoka employees made me feel important and appreciated during my work and activities for victims of violence.”

Opoka is constantly recruiting new volunteers – both as hotline advisors, people offering emotional support, and social media specialists. The experience gained through volunteering with Opoka could prove invaluable for anyone’s future career; fulfillment and working in an understanding team full of support and development opportunities can lead to great prospects.

How GottaBe! Has Supported Opoka

GottaBe! has so far sent two articles to the Polish online magazines and portals in the UK, and for each article there were 7-8 publications in the major Polish portals such as Emito, Wielka Brytania Online and Polonia24.UK as part of our Multicultural PR service. As an ethnic marketing agency, we truly understand the importance of raising awareness on domestic violence in the Polish community here in the UK, so that they know where to find the free help and support readily available to them.

Multicultural marketing is so important, especially where language barriers exist. GottaBe! Ethnic ran a social media campaign on one of the biggest Polish Facebook groups for women, with 40,000 members. We have been posting content on here, the Facebook fan page and on Instagram – see below examples of just some of the informative leaflets we’ve created and shared. 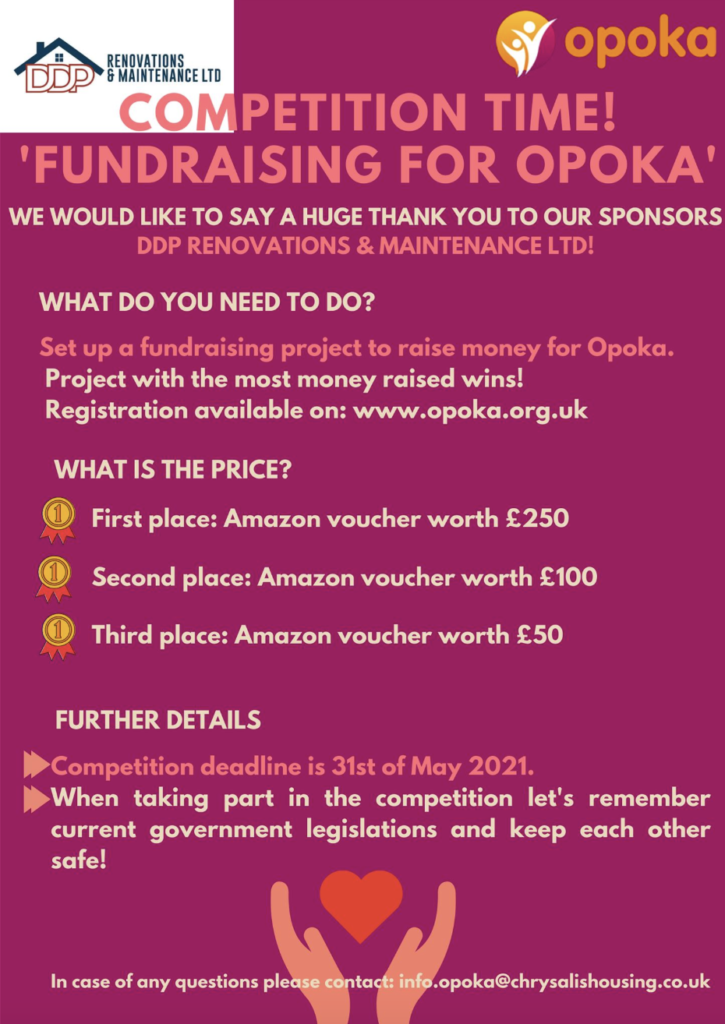 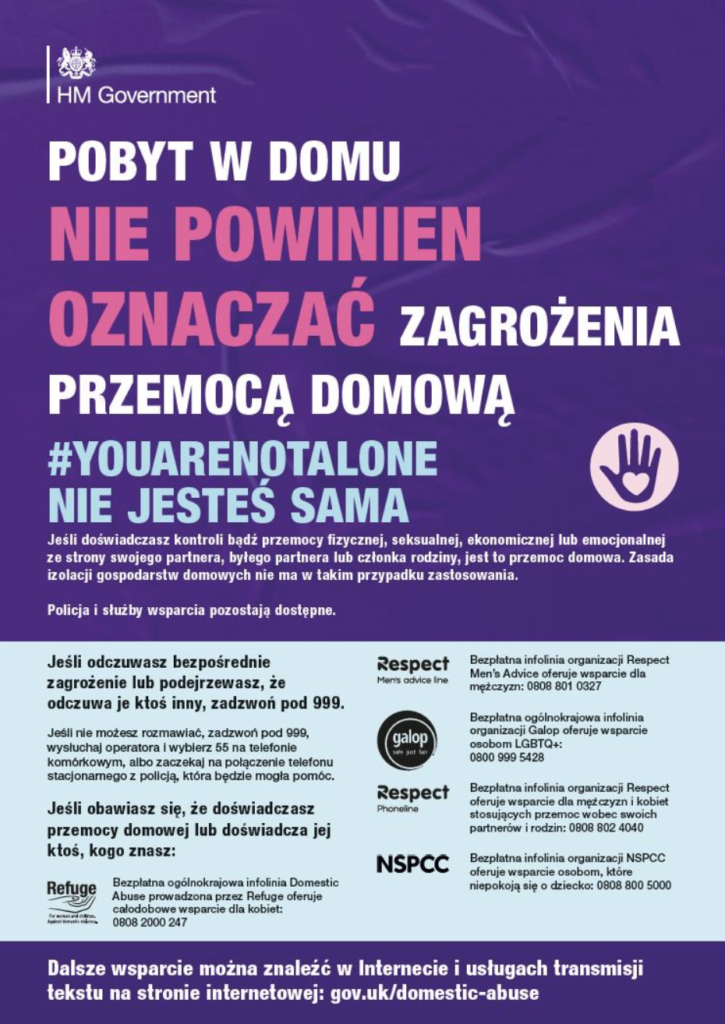 Furthermore, as part of our multicultural influencer marketing offering we have worked with influencers such as Aleksandra Fiddler (Facebook, YT) and Edyta Stepień (YT). Facebook live with Aleksandra proved very successful, with over 400 people watching for the whole conversation. Raising awareness through conversation and communication is vital for ensuring that Polish domestic violence victims here in the UK are aware that support is out there, and that what they are experiencing is not acceptable.

For more information about the Opoka Foundation, visit their website.

Let’s help Opoka and give dozens of women a chance to regain happiness and dignity. Help women and children in danger now, by donating here. Even a small amount can change someone’s life forever.

If you experience domestic violence call the Opoka Helpline for free now on 0300 365 1700.

Let's see how we can work together